The Magic of Mundaneness

Oh the joy of Summer Vacation! I don’t mean the whole summer off our children get, but that one week, we as adults get, with no rules, alarm clocks, rush hour and the daily routine that turns us into robots. It’s that time when anything goes and play is the name of the game. The much needed break allowing us to recharge our batteries, reconnect with our soul and just breath.

It doesn’t matter where you go or even if you go anywhere, as long as you disconnect from the structure imposed upon us daily and go with whatever the day may bring. For me this year’s vacation was not just about disconnecting from the rat race, but about healing after the loss of my Mother. Not having time off after her passing made the stretch between her passing and the actual date of our planned vacation seem endless.

Right after my Mother’s passing, being able to go into “Robot Mode” was a huge help. The grind of the day-to-day structure was a saving grace. I didn’t really have to think. As the weeks wore on though, I longed for an escape from the daily shackles. I found myself counting down the days to freedom. 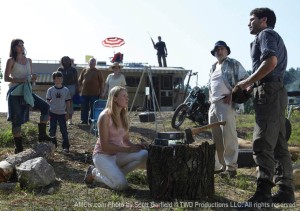 As my patience dwindled the closer I got to my release date, I couldn’t help but think about the survivors of “The Walking Dead” who find solace in just a shred of some sense of structure and routine. Being on the run a large portion of the time, the TWD survivors have on multiple occasions attempted to plant their feet in one location for more than a night, in hopes that they can establish roots. Soon after the apocalypse started they set-up camp in the hills above Atlanta, and for a time felt someone safe. Trying hard to keep some sort of daily order, particularly for the children. They created daily tasks and divided them up.
END_OF_DOCUMENT_TOKEN_TO_BE_REPLACED

Two Steps Forward, One Step Back

By the time I post this, we will be a week into summer vacation and my son’s middle school years will be a blur in my rearview mirror, so, I thought it would be the ideal time to evaluate the impact my new “TWD Apocalyptic Parenting Tactic” has had on my son and myself. This experiment, as I like to call it, really just got off the ground in January, so I’m only pooling from five months, but, knowing that summer and high school (UGHHHH!) will bring on new challenges, I figured it would be good to review what works and what doesn’t. So, here we go. Note, if you haven’t read any other posts besides this one, the next couple paragraphs won’t make much sense, but hopefully they’ll inspire you to read my previous posts.

First I’ll start with the concept, “TWD Apocalyptic Parenting Tactic.” Knowing that I have hit a nerve with my son on more than one occasion, pretty much seals this as a valid method of parenting, at least for me. Plus, having “The Walking Dead” as a bonding factor has helped our relationship grow in ways I never thought possible. As a matter of fact, my end of middle school gift to my son was a trip to the Philly Wizard World/Comic Con, where we had our picture taken with Norman Reedus, AKA, Daryl Dixon in “The Walking Dead.” Then, later in the summer, we will be road tripping to Atlanta to do the Big Zombie Tours by Atlanta Movie Tours, Inc. These are tours of areas in and around Atlanta where “The Walking Dead” is filmed. I don’t know to many 14 year old boys who would be excited to spend their summer vacation with just Mom. It’s amazing what these zombies have done for us.

“What Would Carl Do?” worked well at first, but, when Carl’s character became a smart aleck brat teen in the back half of season four, the last thing I wanted was my son looking to him as a role model. Carl did start to redeem himself by the end of the season, but, until I see where the writers go with him in season five, I will back off a little on this one.
END_OF_DOCUMENT_TOKEN_TO_BE_REPLACED