What Would Carl Do?

It was these very words that sparked a new way of parenting for me fours years ago, and became the catalyst for this blog.

As any parent knows, dealing with a teenager creates a whole new level of challenges. As the hormones kick in, that once sweet, little, abiding child becomes a disconnected, zoned out, somewhat disrespectful foot-dragging walker. Testing you at every turn.

One has to get creative when approaching such a creature. 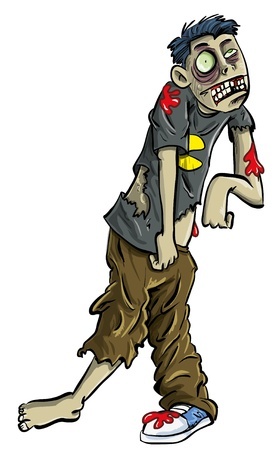 Just as I was at my wits end, it entered my mind that maybe, just maybe, by using “The Walking Dead” (our new found bonding agent) as a tuning fork, I could break through the teen brain fog and make a connection that my son would understand.

My Son had already connected to the character of Carl Grimes, the teenager on the show, so that was where I turned first.

With that in mind, I thought what better a way than then to ask, “What would Carl do?” at the times my Son was slacking and not carrying his share of the load. Or just plain not making wise choices about how he uses his time, particularly with schoolwork due.

The first time I said it, my Son heard me, immediately, and gave me a strange look, like “what are you up to?” I just smiled, said think about it and walked away.

Over time these words have evolved based on what Carl was up to on “The Walking Dead.” Some seasons Carl has been a beaming example for my Son, other seasons he proved to be “What Not To Do” and I used both to my advantage. 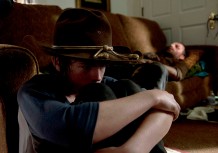 Yes, at times my Son got annoyed, but because he was annoyed, I knew he knew what I was getting at.

Of course Carl wasn’t the only character that made for great examples. There is a huge cast on TWD, with characters behaving badly and saintly, all of which make for examples. The subject matter of the show, surviving a zombie apocalypse, sets up for a plethora of behaviors ripe for the picking.

Some may think I’m crazy for even considering such a notion as to use fictitious characters as examples of what to do or not do in life, but I can honestly say I’ve seen growth with my Son since adopting this tactic.

END_OF_DOCUMENT_TOKEN_TO_BE_REPLACED

Schooled by the Band

At any away football game, one never knows what you will experience from the home team fans. In general there are no major issues, but there are a few schools where the rivalry is pretty intense, so security tries to keep the students on their respective sides to prevent any clashes.

Over my Son’s high school years, his marching band has had to deal with some heckling as they exited the stadium, but in general it has not been that bad. That was until a game early this month, at which time our football team came out victorious after having lost in regular season to this particular team for the past 5 years.

We usually get a police escort when we exit at this school to aid in preventing any problems, but this time there were no police or even any security nearby. This obviously left the band vulnerable for abuse. Not just verbally either.

A bunch of kids were actually dodging in between the lines of band members as they tried to march. Of course they were trying to incite a fight. In addition, some of the group got in front of the band and took pictures as one of their buddies flipped the bird with the band behind him.

Their behavior was beyond rude and disrespectful.

Through all of this the band members just kept marching, not reacting, only politely requesting these intruders get out of the way. Once the band got to the instrument truck the intruders disappeared.

They weren’t gone for good though, after the instruments were packed up and the kids were all on their buses, they reappeared. This time they took to getting physical by volleying rocks at one of the buses. Fortunately the kids on this bus had the windows closed, so no one was injured, but they succeeded in putting a hairline crack in a window.

Needless to say, the band kids were not only extremely shaken up, but also fired up by all of this. They knew they did the right thing in not reacting, but seeing some of their “family” frightened by the intruders truly incensed some of them. As they said, “We are family and no one messes with my family.”

END_OF_DOCUMENT_TOKEN_TO_BE_REPLACED

Monsters Under the Bed 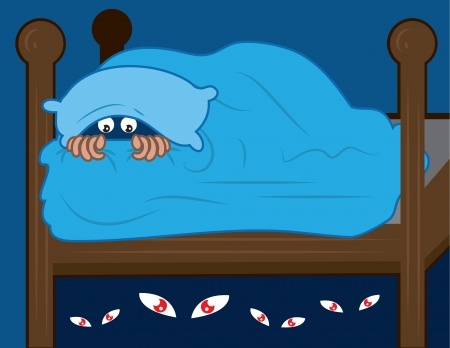 As a child I’m sure you had things that frightened you, I know I did. During the day all would be fine, but once night fell, my imagination would run wild with images of monsters under my bed, in my closet or at the window outside. Every noise I heard during the night was sure to be something scary with fangs and claws coming to get me. God forbid I had to go into the basement by myself. And not just at night, it could have been any given time of the day. That was the dungeon of all things creepy, lurking in every dark corner.

For me, vampires were my number one nemesis. Guessing I watched way to many Bella Lugosi movies in my formative years. Even in the summer, I would sleep with sheets pulled up around my neck. Hell, I still do. Some habits die hard. Even though I knew vampires weren’t real, the imagery in books, films and even TV, remember “Dark Shadows,” laid out an extremely believable world. Enough so that I bought the concept of these undead creatures roaming the earth by the dark of the night in search of their next victim. As an adult, I know better, although I can honestly say that I have known people who are vampire-like, sucking the life out of me, draining me physically, emotionally and mentally. They scare me more than the fictional ones for sure.

As you know, if you’re a regular reader, as a child, my son had a major fear of zombies eating his brain during the night, so he slept with a knit cap on. He has fortunately out grown that, and actually visualizes how he would battle them. Another valuable lesson learned from “The Walking Dead.” He keeps quite an arsenal of Nerf weapons in his room, just in case. (Funny thing though, what he doesn’t get is that his love of electronics is the “real” zombie slowly eating away at his brain. And the new monster under my bed keeping me awake at night and during the day.)

My son, however, is still not fond of a dark house. He turns on lights en route to every room and very often leaves the trail of lights on even with threats to use his allowance to pay the electric bill. The irony here is that he can watch and read things other than “The Walking Dead” that are definitely in the horror genre. Not the slice ‘em dice ‘em ones, but the supernatural, creatures from another world ones, like “American Horror Story” and “Supernatural.” I’m not a huge fan of “American Horror Story,” not because it’s not a good show, but because I found it hard to follow and a bit too out there for me. If that’s believable. “Supernatural” on the other hand sucked me in just like “The Walking Dead” and has become our new addiction.
END_OF_DOCUMENT_TOKEN_TO_BE_REPLACED