Walking Among the Walkers

With the end of the regular football/marching band season the beginning of this month, I’ve been thinking about how valuable the experience of chaperoning 260 teenagers really is, particularly for a single Mom. I have truly been “walking among the walkers” for weeks now, and will continue to as long as the playoffs go. The funny thing is, I have for the most part gone unnoticed, kind of like when Rick Grimes (Andrew Lincoln) and Glenn Rhee (Steven Yuen) from “The Walking Dead” cover themselves in “walker guts” so they can go unnoticed in a horde of walkers in hopes of getting to a vehicle so they can escape the overridden city of Atlanta. Carol (Melissa McBride) does the same thing so she can mingle with walkers to get into Terminus in order to free Rick and his gang in the Season Five opener. The stunt worked in both cases and for the most part works for me too.

Granted, I’m not covered in “sweaty teenager stink” but because these kids hormone riddled brains keep them stuck in their own worlds, they are oblivious to parent chaperones standing right next to them. That is until you catch them saying or doing something inappropriate and you make yourself visible, then, all it takes is the look and they know they’re being watched. At least when they become aware of your presence, they don’t chase you down and try to make you dinner like a walker would.

Remaining anonymous aids me in getting into the psyche of the teenage “aka walker” brain and reminds me I was once a walker too and I would never want to go back to High School. It’s allowed me to step outside of my role as my son’s Mother and try to look with empathy at the plight of a high school student. The world today is vastly different than my high school years and there are plenty more pressures put on kids today. Not just from the teachers but from parents, like me. 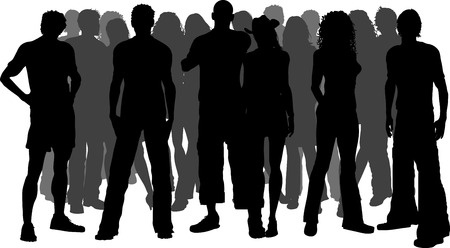 If you are a regular reader, you know I have been relentless with my son about many things, but his gaming and computer time are the biggest bane of my existence. “Walking among the walkers” has enabled me to begin to see things from a different perspective and believe it or not, attempt to take a new, gentler approach with my son in regards to his electronics.

Being able to speak with other parents of teens has certainly made me reevaluate how I go about dealing with my walker, not just with electronics, but in general. I’ve realized I sort of live in a bubble. I’m too close to the situation, which makes it hard to change my perspective. It’s just my son and I, and as a single parent, outside of work I do not socialize much, except during the football season. My days revolve around work, home, and my writing, which is my saving grace when it comes to my sanity. The bulk of my co-workers have grown children, so in general, I have no real comparisons when discussing the struggles of raising a teen. Not that kids have changed that much over the years, but technology has and that makes a hell of a difference when dealing with children of any age.

I’ve found it almost comforting to be told more than once, “That’s just a typical teen.” in reference to how much time my son spends on his computer. Not that that makes it right, but it’s hard to push when all my son’s peers behave the same way. Some even worse than him, as my son is quick to point out. Speaking with my peers in regard to the issues that concern me about my son made me realize that I may most certainly be part of the problem. Or should I say, my approach could be the problem. 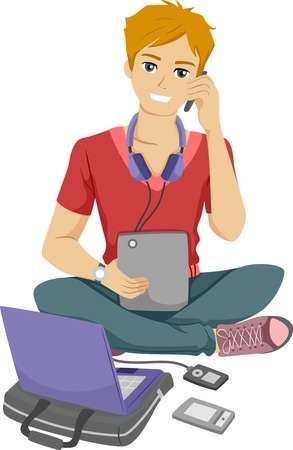 Kids of all ages need boundaries, but as they hit their teens they need to be learning to set their own, within reason of course. So, instead of brow-beating my son in regard to his computer time, I have re-vamped the house rules, making it his responsibility to self-monitor or pay the consequences. He is still not allowed to play video games during the school week, but, he is allowed to use his computer with a few stipulations: his school work and chores have to be done and his overall grades need to be good. In addition, he needs to get up in the morning without pushing the clock and me, and needs to show up for dinner when I call.

Needless to say, this is most definitely an experiment and a challenge for me. My son is still horrible in the morning, although a kitchen timer set as a countdown clock is showing some promise. He has also been extremely inconsistent with the time it takes him to get to the dinner table once told dinner is being put on the table.

I have attempted to get him to be part of the solution, but to date all I have been met with is apathy. Since he now believes computer programming is what he wants to major in come college, it was suggested by a fellow parent that I have him come up with the Dinner Bell App. This App, when activated, sets off an alarm on his computer, which he could hear with his headset on. Thus eliminating my somewhat useless yelling up the steps to him because can’t really hear me any way. Although my son thought this was a cool idea, he has yet to do anything about it.

Getting him to be part of the solution is a huge issue, in any area. He admits he gets lost when he’s on the computer, regardless of what he’s doing, and I get that, we all can, but, when made aware of it, those us with self-control and a concept of responsibility quickly stop and get on with what needs to be done. At the root of this is maturity, which my son is most definitely lacking in. As I’ve said to him, I don’t expect him to be a “grown-up” but I do expect him to be grown-up about his responsibilities and commitments.

It’s obvious by the comments on his first marking period report card that he is doing this at school. Comments like “commendable work ethic,” “homework assignments well-prepared” and “comes prepared to class” prove to me that he is capable of being grown-up about his school responsibilities, he’s just lagging behind at home.

Will backing off help to turn the tides at home?

I certainly hope so because right now I’m still dealing with Carl (Chandler Riggs), Season 2. The only difference is my Carl is in the house; he just doesn’t leave his room. Even just a slight sign of evolution into the responsible Carl from Season 5 and 6 would bring joy to my

Maybe it’s time to bring back “What would Carl do?” to make my point in a more subtle way. As I’ve learned from “walking among the walkers” you have to get inside their brains in order to get them to take action. Sometimes no action on my part or the appearance of it, has more impact than action.

© Mariann E. Danko and Waking the Walker, 2015. All rights reserved.